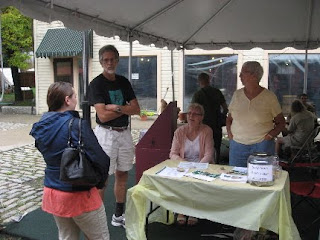 HARVEST FEST — On Saturday, Sept. 24, volunteers of the Friendship Center manned an informational table at the second annual Harvest Fest at Heritage State Park, accepting food and monetary donations. Here, Rich Davis, Cynthia Davis, and Pat Cumberbatch speak to a visitor. Thanks to all who participated! (Below the text: Williams students visit and support the Friendship Center Food Pantry)

I have observed as “webmaster” that since Tropical Storm Irene and the flooding debacle at the Spruces mobile home park in Williamstown, many people have come to this blog site, searching on the topic “Affordable Housing.”

The reason people can find the topic affordable housing on our blog is that for our May Interfaith meeting we had planned and publicized a visit from the Citizens Housing and Planning Association from Boston. Unfortunately, the visit from CHAPA had to be cancelled at the very last minute (a day and a half before) due to unforseen circumstances.

The good news is that this meetinig has been rescheduled to Friday, Oct. 21, at 10 a.m. at the First Baptist Church of North Adams (use Eagle Street entrance). All are welcome to come and discuss the next steps in advancing various affordable housing initiatives. Share your ideas on how affordable housing and community development should be shaped in 2011 and beyond.

We urge everyone to attend a major fundraiser for Food and Fuel on Thursday:

A Spaghetti Supper at The Elks Lodge at 100 Eagle St, to benefit the Friendship Center Food Pantry and the Berkshire Community Action Emergency Fuel Fund, will be held on Thursday, Sept. 29, from 4 to 7 p.m.

There will be a 50-50 Raffle and a Silent Auction. The menu will be spaghetti and meatballs, salad, dessert, and coffee. Tickets are $7. Seniors and children under 12 are $6. Tickets will be available at the door, or call BCAC at 663-3014.

By the way, the need to support fuel assistance locally hasn’t been getting as much press as it probably should. (At least on this site). So I’m glad we are partnering with BCAC to help raise funds for this necessity.

Little did we know at the time that just two weeks later we would have major flooding in the area of the type not seen locally for several decades. It was flooding of the sort that my parents and grandparents lived through in North Adams in the 1920s, ’30s, and ’40s, and which led to the installation of the flood control chutes during the Eisenhower administration.

I’m afraid that like the enormous amount of snow we received this past winter, or the tornado that struck Springfield earlier this year, the flooding indicates that our weather is growing more extreme as the climate changes.

Vivian Orlowski’s specific topic at our August meeting was the Faith Community Partnering for Emergency Preparedness project. Obviously, faith communities are only one piece of the puzzle, but they were a piece that played a big role in Northern Berkshire as soon as it became apparent that the Spruces had undergone devastatiing flooding.

A big role was played in initial relief efforts by the emergency voucher system which, though pre-existing, the NBIAI is working on preserving and expanding throughout Northern Berkshire. The money we had in our account for it was soon all used up, and faith communities just made more copies of the vouchers and sent out more moeny to back them up.

How his emergency use will affect the voucher system over time is something the NBIAI voucher team will need to explore. For the originial and ongoing intention of the voucher system has been one-time assistance of people traveling through the area who need a hand.

Anyway, Vivian is currently setting up meetings with Clergy Associations in Western Mass., including Northern Berkshire. In January or early Feburary, there will be a regional Faith Community Partnering for Emergency Preparedness Conference. We will let everyone know where and when this will be held, as we will no doubt be sending a significant contingent to it.

And I imagine the NBIAI will be revisiting this topic at an upcoming monthly meeting — and sooner rather than later. 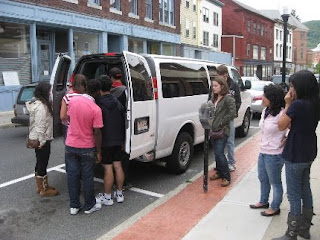 WILLIAMS STUDENTS HELP — On Saturday, Sept. 17, Williams College students taking part in the first-year orientation program “Where Am I?!” brought the results of their two-week campus food drive to the Friendship Center. In the second photo, senior leaders Sugi Min and Alexandra Carr (standing) help supervise as Stuart Crampton, treasurer of the Friendship Center Food Pantry, prepares to roll the food into the Center. Once inside, the students put the food up on our shelves. Two weeks earlier, Stuart, Gail Obrest, Tony Pisano, and Mark Rondeau spoke to the students about the Frienship Center and about their background in the local community. 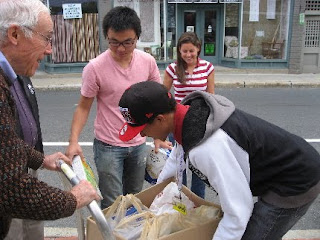 Posted by Mark Rondeau at 6:34 PM No comments:

5). Aleta Moncecchi - Fundraising Dinner on Aug. 29. (We will likely move this up to after announcements to accomodate Aleta’s schedule).

6). Further discussion of this dinner.

7). Voucher System Update/Implications of its use as an emergency response tool.

Posted by Mark Rondeau at 10:37 AM No comments: