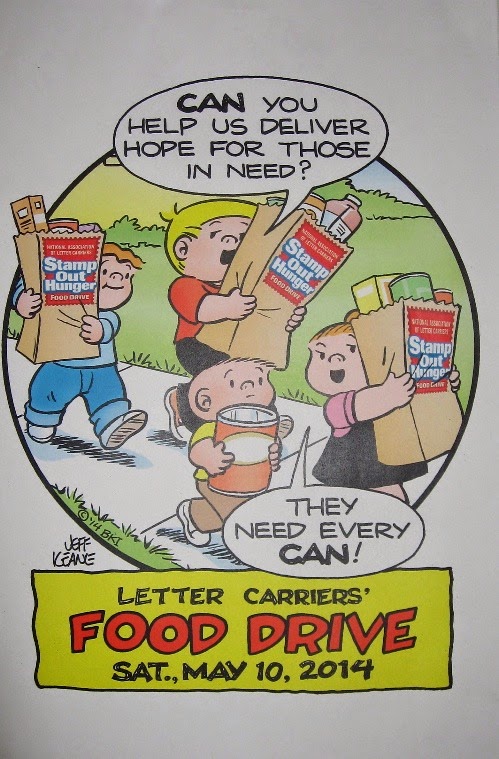 Each year, our local letter carriers make a heroic effort to collect donated food from residents along their routes. This food then goes to local food programs.

Here is a press release by Al Nelson that we have ready to help announce the food drive:

On Saturday, May 10, our local food pantries get help from your letter carriers.
You can make their day and help those in need in your community by leaving a bag of non-  perishable food by your mailbox, your door, or business before your regular mail delivery to be  taken to Northern Berkshire pantries.
The Berkshire County Letter Carriers’ Branch No. 286 out of  our post offices in North Adams, Adams, and Williamstown will come together with volunteers  from the Interfaith Action Initiative, and  Mass In Motion, the latter a  program of the Northern  Berkshire Community Coalition to help alleviate the increasing plight of food insecurity for many of our neighbors.  Lots of people in our area are in crisis. Families with children, the  working poor, and seniors. A visit to a pantry twice a month helps immensely to supplement  their meals with nutritious food.  And it’s always passed along by volunteers in friendship with  dignity and respect.
Your generous donations will fill the shelves of the Friendship Center, Berkshire Food Project,  and the Salvation Army in North Adams.  In Williamstown, the Saints Patrick and Raphael Parish  and the Community Bible Church. In Adams, the Pope John Paul Charity Center has asked that  food in that area be directed to the Family Life Support Center Louison House.
Your letter carriers see the problems face to face during their mail deliveries. They’re ready to  help in a big way on Saturday, May 10th. Bags of food from those who can give will make a difference to the hungry in our communities.

We are looking for volunteers for this drive. If you can help, email us at northernberkshireinterfaith@gmail.com. 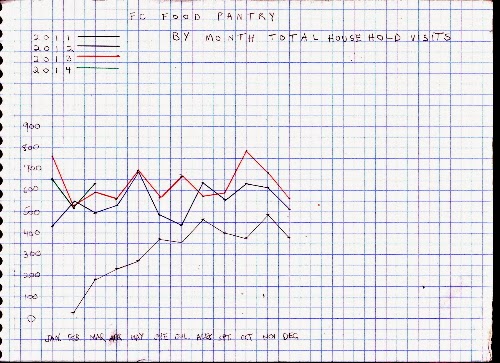 This chart shows that the total number of visiting households this year was higher in March than in previous years. Green line shaped like a V shows 2014 trend.

The need for food remains steady. So far we have not seen a great increase in pantry members due to the unfortunate closure of North Adams Regional Hospital, though this may change. As was well-publicized in the local media, we did receive about 1,400 lbs. of food left over from the hospital. To call this donation “bittersweet” would be accurate.

It’s worth noting that the Food Bank of Western Mass. has been quite active in finding out whether they can be of any assistance in providing food aid to those who lost employment at the hospital, even asking our food service director directly if we have seen in an influx and needed extra help getting food. So far the answer has been no. 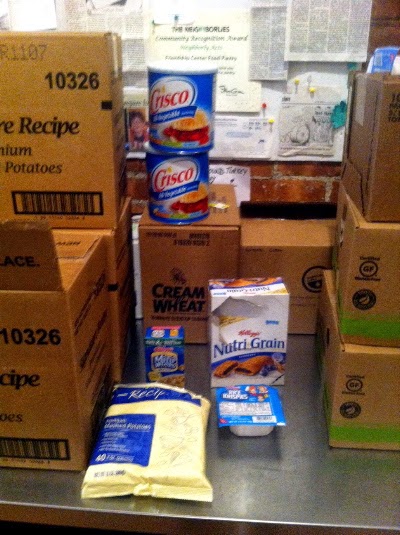 Some of the food given to the Friendship Center Food Pantry by the hospital. 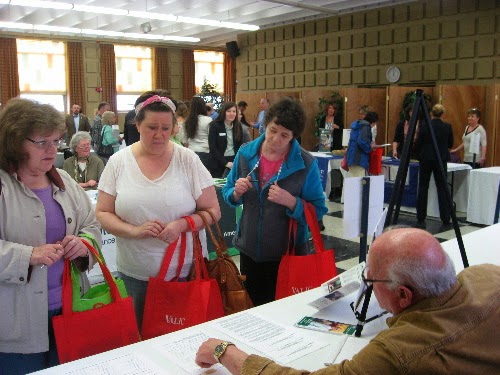 The Friendship Center Food Pantry took part in a services fair at MCLA on April 11 for those who had lost their jobs at North Adams Regional Hospital. These women speaking to Steve Green did not need our services. Those who do are encouraged to call us at 413-664-0123 or stop by on Wednesday between 10 a.m. and 2 p.m. or 4 to 6 p.m.

In some better news, our friend and original Eagle Street room nurse, Barb Cariddi, who lost her job with the VNA when the hospital closed, has been hired by Berkshire Medical Center and was up with us on Wednesday, April 23. Though she has other duties now, she told her new employers that she would be quite happy serving with us on Wednesdays. We should be seeing more of her in the future. Fortunately, we now also have the services of nurse Cindy Croce, who also has been a joy to be around and a blessing to us and our visiting friends. 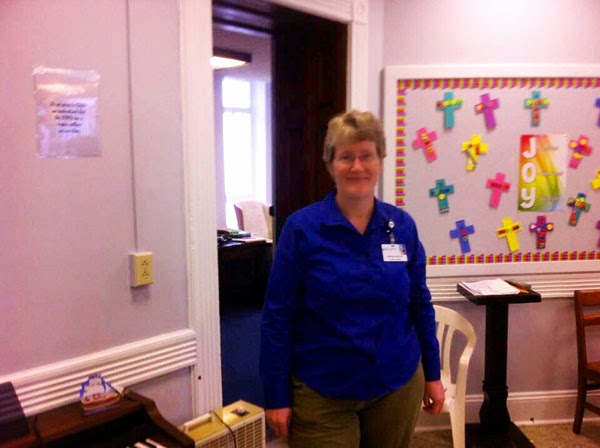 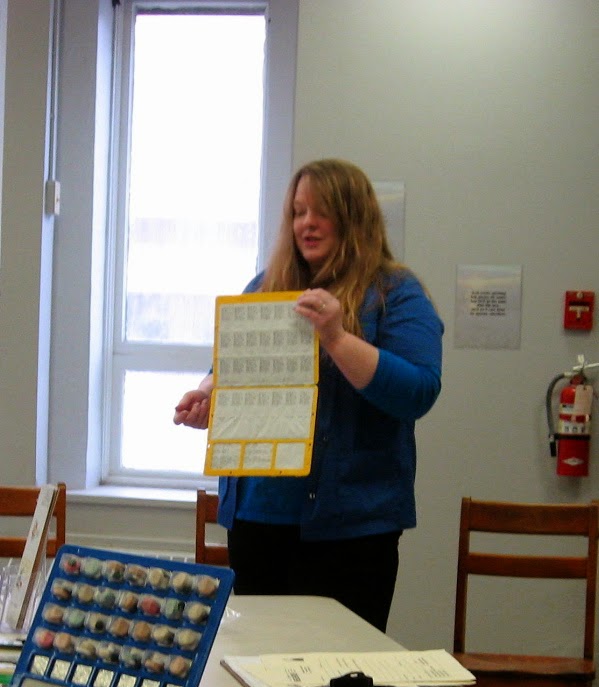 Debbie Vallieres, from Little’s Pharmacy, spoke at our March meeting. She was very knowledgeable and dedicated to the services she helps provide.

Since our last post, we have had two great third-Friday meeting monthly presentations.

At our March meeting, Debbie Vallieres, from Little’s Pharmacy, spoke about Medicare Part D drug coverage problems and solutions for people with financial need. She will also talk about Part B coverage, and medication compliance as a means to decrease hospitalizations and re-admissions.

She particularly impressed us with how the pharmacy goes above and beyond with its program to compile monthly packets of the pills its customers need. Each day has its own compartment. This is a nation-wide program that Little’s participates in and is quite impressive.

At our April 18 meeting, 13 people gathered for a reading on and discussion of Catholic Social Teaching led by Sister of St. Joseph and former Northern Berkshire Community Coalition employee Natalie Cain. In four years of monthly meetings, this was the first time most of those present stayed seated well past noon to continue the discussion.

We read as a group the 1975 pastoral letter of the Appalachian Catholic Bishops “This Land is Home to Me.” It is very poetic and incisive and we marveled at how much it in is relevant to the U.S. today and how much of it relates to very closely to our life in North Adams:

“Without judging anyone, it has become clear to us
that the present economic order does not care for its people.
In fact, profit and people frequently are contradictory.
Profit over people is an idol. And it is not a new idol, for Jesus long ago warned us.”

“In a country whose productive force is greater than anything the world has ever known, the destructive idol shows its ugly face in places like Appalachia. The suffering of Appalachia’s poor is a symbol of so much other suffering — in our land — in our world. It is also a symbol of the suffering which awaits the majority of plain people in our society
– if they are laid off,
– if a major illness occurs,
– if a wage earner dies,
– or if anything else goes wrong.

In this land of ours, jobs are often scarce,
Too many people are forced to accept unjust conditions
or else lose their jobs."

“Throughout this whole process of listening to the people, the goal, which underlies our concern, is fundamental in the justice struggle, namely, citizen control, or community control. The people themselves must shape their own destiny. Despite the theme of powerlessness, we know that Appalachia is already rich here in the cooperative power of its own people.” Above, Sister Natalie Cain hands a copy of “This Land is Home to Me” to Eric Wilson at our April Interfaith monthly meeting. Below, some of those who attended reading the letter, which applied Catholic Social Teaching to the lives of ordinary people in Appalachia and the U.S. 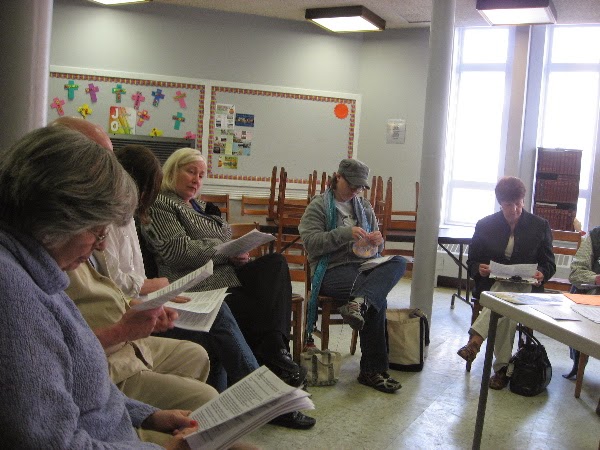 The next meeting of the Interfaith Action Initiative will be held on Friday, May 16, at 10 a.m. in the Eagle Street Room of the First Baptist Church of North Adams. All are welcome
No topic for the meeting had been determined as of the writing of this post. Keep an eye out for upcoming announcements of what it will be. 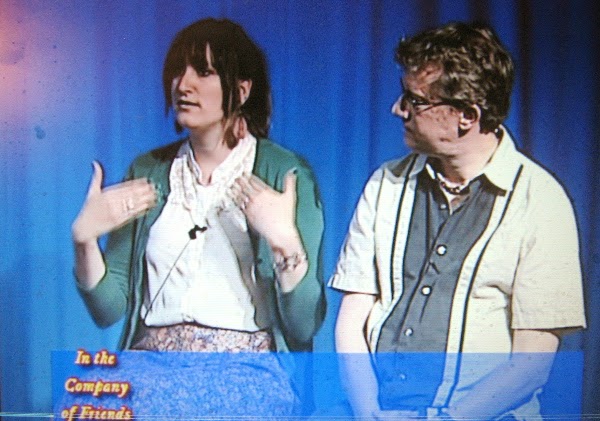 Annie Rodgers and Peter Gentile speak about the North Adams Lip Dub project on “In the Company of Friends.”

After a several-month absence, the cable TV show “In the Company of Friends” is back on Northern Berkshire Community Television Corp.’s Channel 15. This is 116-2 on my TV.

Annie Rodgers and Peter Gentile were our guests. Annie is leading the project for the Northern Berkshire Community Coalition and Peter will produce and direct the Lip Dub.

The Lip Dub would be a great project for community spirit, but time to fund it is running out. This would be a music video promoting North Adams, filmed downtown in September, with people saying the words to a locally written song.

The video would be filmed in one take, with no cuts. You’ve likely seen one, whether you realize it or not.

To find out more, visit here. Or watch the program on NBCTC Channel 15 on Sundays at 7 p.m., Mondays at 7:30 p.m. and Tuesdays at 3 p.m. The Monday and Tuesday times will not apply during the first week of May.

To those who would say that such a project is not appropriate at this time of hospital and job loss, I say not doing it will not bring back jobs or medical services. On the other hand, all the money spent on this will stay here, locally. A successful project will provide a boost to the economy and the city’s image as a resiliant place.

The message to the world would be not another version of: “Poor North Adams reels from another hit” but “North Adams, the tough little city that just won’t quit.” Think about it — then please donate if you can!

God Bless All of You,

Posted by Mark Rondeau at 10:14 PM No comments: