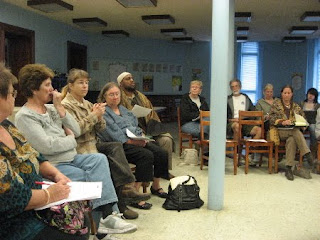 (First article by Mark Rondeau, co-organizer of NBIAI. Second article consists of notes from the meeting complied by Carol Marine of CHAPA)

A heightened local awareness of the importance of affordable housing dominated the Oct. 21 monthly meeting of the Northern Berkshire Interfaith Action Initiative (NBIAI).

Aaron Gornstein, CHAPA executive director, said the group promotes affordable housing throughout Massachusetts. “We pride ourselves in really taking into account urban, suburban and rural communities,” he said. “We are active in all areas of the state.”

The flooding of the Spruces mobile home park in Williamstown by Tropical Storm Irene on Aug. 28 left more than 200 people, mostly elderly and on fixed incomes, without homes. Only a handful have moved back into the park since; many others have not yet found permanent, affordable housing.

Several of the 23 people who attended the Oct. 21 meeting were from Higher Ground, the group of mostly Williamstown residents who are working to help resettle the people left homeless by the flooding and who will seek longer-term solutions for affordable housing.

“The main issue for us is that all of the affordable housing, or housing that’s based on income, that could be supported by federal or state contract, is full within a 100-mile radius,” said Robin Lenz, who has led the efforts to directly aid Spruces residents.

Al Bashevkin, executive director of the NBCC, noted that the 220 units of housing in the Spruces park — where people who owned their trailers paid just $250 per month rent — is a lot of affordable housing to replace: “To take that off the market creates a huge affordable housing issue for this area.”

Bilal Ansari, a chaplain at Williams College and a member of Higher Ground, who worked on affordable housing in New Haven, Conn., said a huge problem in this area is that there is no real data on the need for affordable housing and no strategic plan to meet the need.

“Another great need is for a local affordable housing non-profit to be located in the Northern Berkshire area that is native, that has the best interests of this area at heart,” he said. “Everybody is reaching across the state for that. There needs to be one raised up so that it employs the local residents here in construction, it creates jobs.”

Mark Rondeau, co-organizer of the NBIAI, said one of his concerns is that in a year, when everyone displaced from the Spruces has been settled, the affordable housing issue will be dropped.

Margaret Johnson Ware, a member of Higher Ground, said the flooding has pointed out that there isn’t enough affordable housing in the whole area. The days when plentiful apartments are available in North Adams at a low price are long over. Others noted that rents in the city are now about $600 per month.

“I think the Spruces opened our eyes,” said Aleta Moncecchi, who works in Northern Berkshire for the Berkshire Community Action Council. “It’s always been an issue. It’s just the first time I thank that everybody’s stopped and realized it.”

Even for affordable housing organizations in the Berkshires, Northern Berkshire is not their focus. “What I’ve learned over the years, is if we’re going to pay attention to North Berkshire County, we need to have things located here,” Bashevkin said.

Asked who else needs to be at the table as the local affordable housing effort moves forward, those present mentioned the business community — especially developers; municipal and other elected officials; and those in need of affordable housing themselves.

Gornstein said a large coalition formed in 2010 in opposition to the November ballot quesiton to repeal the state’s affordable housing law. The referendum was defeated by a 58 to 42 percent vote.

Some 2,500-3,000 people around the state were active on the campaign to save the affordable housing law. After the vote, they wanted to keep the momentum going. To that end, CHAPA has held meetings around the state and formulated a plan to begin early in 2012 called Welcome Home Massachusetts.

Over the course of three years, this initiative aims to increase the amount of affordable housing in urban, suburban and rural communities, and provide support to local groups. This will be done through a statewide messaging and media campaign highlighting the need for affordable housing. A second component will be education and information, particularly through a new website featuring an extensive online guide to implementing local housing strategies. Third will be in-depth assistance for five communities per year, 15 over three years, to achieve their affordable housing goals.

Gornstein explained that the Massachusetts affordable housing law, saved by the 2010 vote, is a zoning law that allows non-profits and for-profits developing affordable housing to expedite the permitting, including overriding local zoning barriers, though a developer still has to get all local approvals.

“It’s the primary way that whether you’re a housing authority, a non-profit or for-profit...that affordable housing is getting built today in suburban and rural communities,” he said. “Zoning does not typically allow for the kiind of housing that is being proposed.”

For instance, zoning may permit one home every one or two acres: “You can’t do affordable housing that way.”

Market rents are about $500 more than mobile home rents Despite 18 month rental assistance, there are no vacancies

Looming issue of landlord passing on removal costs to tenants of

Spruces, with costs estimated at $5000 per home

In addition to victims of TS Irene and families, college kids and

economic disadvantage and no jobs, poor education and lack of GED

Suggestion of folks so desperate that they will commit petty crimes to get into prison system for food, shelter and medicine

Non profit formed in response to TS Irene to address immediate and permanent shelter, food and other needs of those displaced

affordable housing in the area and create solutions

Possibility of new CDC entering North Berkshire with structure and

Many affordable apartments have been converted to condominiums

3). Other Community Leaders that Need to be Involved

developers” to tap funding and know how

Elected officials – state and local – some BOS are supportive but

LISC, Higher Ground and others can pull in officials

Employers such as colleges and hospitals – Williams already involved

Habitat for Humanity and other such groups

Recognition that collaboration of multiple communities may open up

Need to direct funds not only to permanent housing but to

Collaboration with colleges such as involving students in data

With regard to technological resources, many in western MA do not have access to internet

Provide community room with internet Community effort to link people in need through internet, get them connected and use networking to increase access to housing options; then turn to education; essentially help people “restart” their lives through housing and internet housing resources 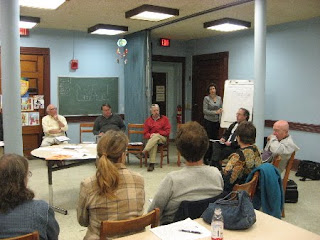 Posted by Mark Rondeau at 5:19 PM No comments:

2). Moment of prayer: Particularly this month for our Colleagues/Friends.

5). Affordable housing discussion with representatives of the Citizens and Housing Planning Association.

6). Discussion about implications of and adjustments to cuts in BCAC staff.

Posted by Mark Rondeau at 8:52 AM No comments:

Since devastating flooding from Tropical Storm Irene hit the Spruces mobile home park in Williamstown, the topic of affordable housing has come to the forefront in our area.

The Northern Berkshire Interfaith Action Initiative (NBIAI) will host a forum on this topic with the Citizens Housing and Planning Association from Boston. It willl be held on Friday, Oct. 21, at 10 a.m., at the First Baptist Church of North Adams (use Eagle Street entrance). All are welcome to come and discuss the next steps in advancing various affordable housing initiatives. Share your ideas on how affordable housing and community development should be shaped for the rest of 2011 and beyond.

This meeting was originally planned to be held in May but had to be cancelled due to unforseen circumstances.

Here is information that Carol Marine, of CHAPA, has sent out to us about the discussion:

Affordable Housing In Your Community: 2011 and Beyond

The No on 2 Campaign resulted in a decisive “win” for affordable housing at the ballot last November, and Citizens’ Housing and Planning Association (CHAPA) is building on that momentum and grassroots support throughout the Commonwealth. Many of you have asked us to convene a series of meetings to discuss next steps in advancing various affordable housing initiatives; we are confident our efforts to create affordable housing can continue in new and exciting ways!

Please join us to add your voice to the discussion. Vision starts with citizens in each and every community. Come share your ideas on how affordable housing and community development should be shaped in 2011 and beyond…

The agenda will include:

a.What is happening in your community and your region?

b.How can we advance affordable housing initiatives at the local level?

c.How can we advance affordable housing policy at the state level?

To date, we have held 13 meetings across the Commonwealth. We are delighted that the Northern Berkshire Interfaith Action Initiative and the Northern Berkshire Community Coalition are hosting our next (and final) regional meeting on Friday October 21, 2011 at 10:00 a.m. at the First Baptist Church at 131 Main Street on the corner of Church and Main Streets in North Adams. We hope you will attend and contribute your views on furthering affordable housing in Berkshire County.

For any questions, contact Mark Rondeau at the Northern Berkshire Interfaith Action Initiative at markrondeau@earthlink.net. No need to call ahead, just come to the meeting!

So please come join us discuss an issue that will continue to loom large even after the immediate crisis faced by so many of the residents of the Spruces in Williamstown is met.

Posted by Mark Rondeau at 9:15 PM No comments: