Lots of News to Catch Up On 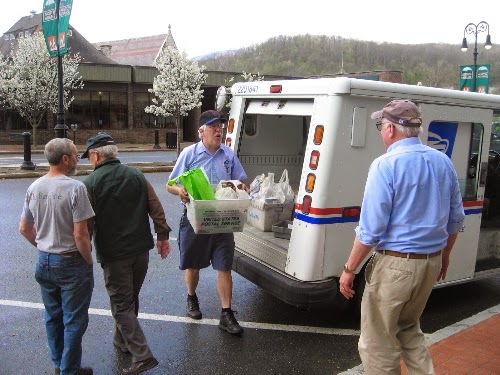 If it's spring, then the annual Letter Carrier Food Drive must be coming up, this year on Saturday, May 9. This photo is from the 2014 drive.

It’s been a while since I’ve posted here. A lot has been going on. There is some news, too. 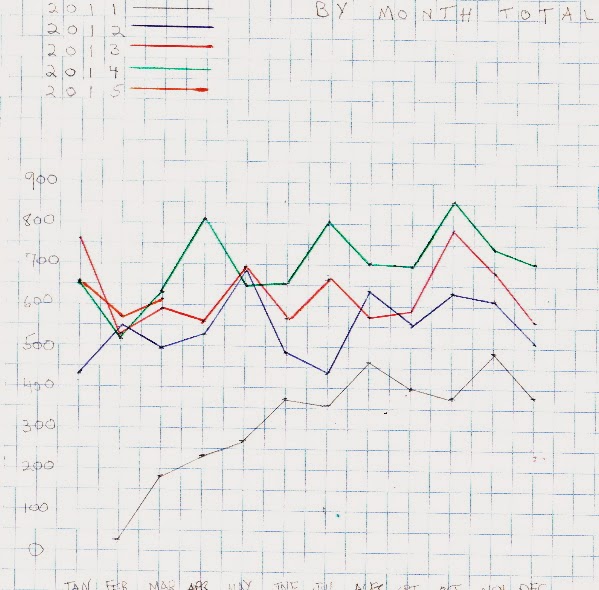 The Friendship Center Food Pantry is seeing an increase of visitors in 2015 (orange line) compared to 2014 (green line) but the difference is not huge.

Usage of the Friendship Center Food Pantry remains brisk, though numbers of visits between the end of last year and the beginning of this year have leveled off somewhat (see chart above.)

We reached 2,000 registered members last year. Though no doubt a siignificant number , we know that many of our original members have moved out of the area and some have passed away. We are now adding about 3 new pantry members per week as opposed to 14 or more per  week a year or so ago.

As you may know, we are open from 10 a.m. to 2 p.m. and 4 to 6 p.m. every Wednesday, 52 Wednesdays per year. We observed our fourth anniversary as a pantry iin February.

Since we opened we have been  located in a 750-square-foot space at 43 Eagle St.  Around the beginning of May, we will be moving next door to 45 Eagle St., which has a total of 1,278 square-feet of usuable space. The biggest asset of this will be more space for our volunteers to maneuver and more space up front for our visiting friends.

Currently, as anyone who has visited on a busy day knows, there is not a lot of room up front for our visitors. I measured it recently, and it is only 155 square feet. This move should offer a lot more space to maneuver.

We will be vacating 43 Eagle Street but will still be conducting our sign-ups in the Eagle Street Room of the First Baptist Church of North Adams.

About 75 feet long and 9 and a half feet wide, 43 Eagle Street has served us well and I will miss it. Over the years, our volunteers have developed great mastery in filling our member’s food orders with efficiency, even when they are practically packed in like sardines!

In more good news, the ride-giving program spearheaded by the First Congregational Church of Williamstown and Wiilliams College, with help from many other quarters, is underway. As you may know, the Friendship Center has been offering people the option of getting a taxi ride home, paid for by the pantry. This has added up to a few thousand dollars per year for rides.

In a wonderful expample of interfaith cooperation, these volunteers have been working with us to launch this program. It saves the pantry money, but more importantly it is a faith-based community-building service making connections and building friendships.

It took a great amount of work both to collect and meaningfully tabulate, but results of the Food Survey of our pantry members conducted in February and March are now ready. We did this in conjunction with Amanda Chilson and the Mass in Motion program. People were quite willing to take the survey which asked eight questions and we had 233 responses.

The first question was, what are your favorite foods that we offfer? Fully tabluated by category — we received very many specific responses detailed further on — the resulting answers were:

We will have more results available at our NBIAI meeting this Friday, April 17, at 10 a.m. in the Eagle Street Room of the First Baptist Church of North Adams. All are welcome to attend.

Speaking of this next meeting, it  will feature a discussion about preparations for the upcoming Letter Carrier Food Drive, which will be held on Saturday, May 9. The meeting will be held at 10 a.m. at the First Baptist Church of North Adams. (Please use Eagle Street entrance).

Sorting the food collected by our Letter Carriers in North Adams, Clarksburg and Florida is a huge, but fun, task and takes lots of volunteers. The total weight of collected food regularly exceeds 5 tons!

Those interested in volunteering are encouraged to attend the meeting, though it is not necessary in order to volunteer. As noted above, those attending will be able to learn more about the results of the recent Food Survey.

Also at the April 17 meeting, we will again discuss the work of and seek possible members for, our new Interfaith Programs and Events Subcommittee. We had good interest at our March meeting and hope to hold its first meeting before summer.

The NBIAI Interfaith Events and Programs Subcommittee was created by the NBIAI Board of Directors at the October 2014 board meeting. The purpose is to work on interfaith events events and programs. These may be of an inspirational, informational, service or social nat ure — mostly likely some combination of the four.

As with the NBIAI — which took on the food pantry task when the community needed it —  we would look for things that aren’t otherwise being done.

The vision for this subcommittee is faith, community and friendship. Like the NBIAI, this will be a group of people of different faiths and denominations working with others of goodwill.

For more info about the April 17 meeting, how to help with the Food Drive, or the Interfaith Programs and Events Subcommittee, call Mark Rondeau at 413-664-0130 or email northernberkshireinterfaith@gmail.com. The Friendship Center Food Pantry number is 413-664-0123.

A new service at the Eagle Street Room 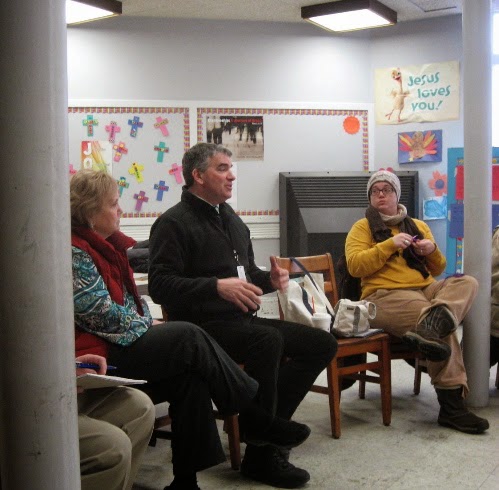 Alan Rilla speaks about the Re-Entry Initiative at the January public meeting of the NBIAI.

Both our January and March meetings were on the topic of the Berkshire County Sheriff Office’s Re-Entry Initiative, which is headquartered at the former Berkshire County Jail building on Second Street in Pittsfield. In January we spoke to Program Director Alan Rilla and in March we spoke with Lindsay Maynard, programs and treatment coordinator.

As a result of our January discussion, this outreach to ex-offenders now uses the Eagle Street Room to meet with people from north county between food pantry sessions on Wednesday, basically 2 to 4 p.m. For more information about this program, call 413-443-7220, ext. 1190. 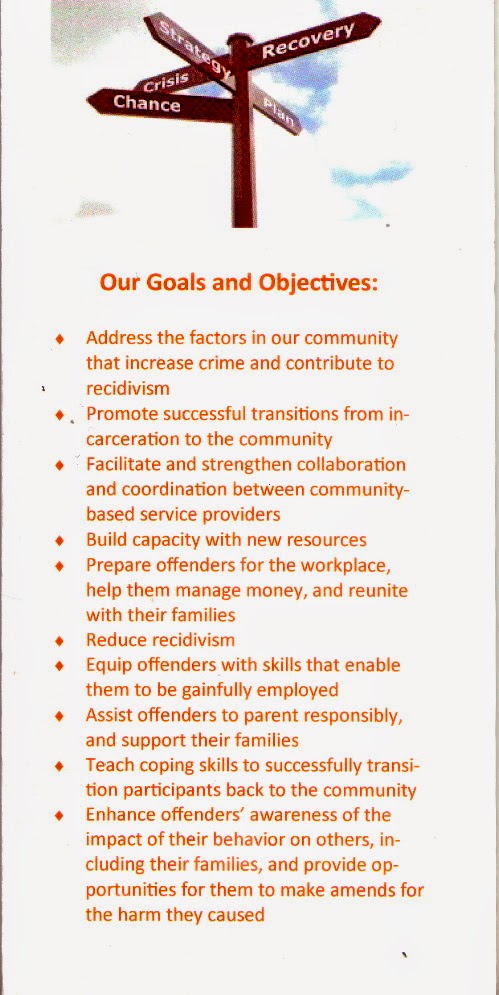 Part of a flyer for the Re-Entry Initiative.

The April 9, 2010 forum of the Northern Berkshire Community Coalition was on the topic of the intersecion of faith and commuity life. At least two of us at the forum did not feel that the clergy were doing enough interfatih work (compared to communities such as Bennington, Vt., for instance) and said so. The clergy in turn challenge us laypeople (non-clergy believers) to do more. Thus was born the Northern Berkshire Interfaith Action Initiative. We held meetings for several months, looking for a service initiative that did not duplicate anything existing.

Late in 2010, the Berkshire Community Action Council’s food pantry in Northern Berkshire could no longer function. So we found a project, and the Friendship Center Food Pantry was born, opening in February 2011.

We also revived and expanded a ministry voucher system. Ran a service for mental illness recovery and understanding for two years and hold public meetings most months on the third Friday of the month at 10 a.m. at the First Baptist Church of North Adams. All are always welcome to attend.

By the way, we get on fine with the clergy, and several who were at that Coalition forum at 2010 became big supporters of our effort, including the pastor who challenged us laypeople to do more!

Thanks for visiting and reading and God Bless, 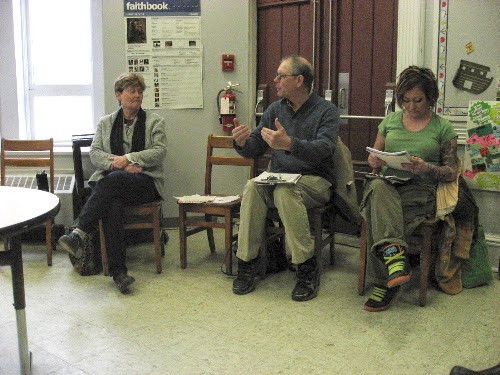 At our March Interfaith meeting, we talked about the Sheriff's Office re-entry programs for ex-offenders and also the new NBIAI Interfaith Events and Programs Subcommittee and the closing of North Adams Regional Hospital and the desire to re-establish a full-service hospital in Northern Berkshire. Thirteen people attended. 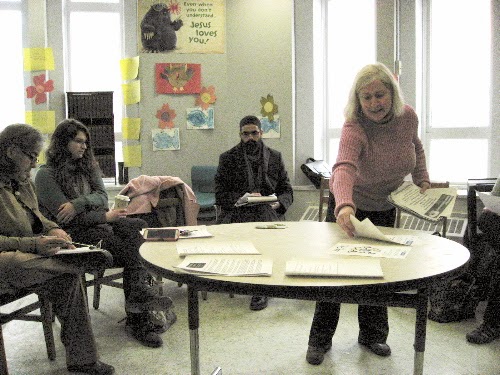 Posted by Mark Rondeau at 8:29 PM No comments: