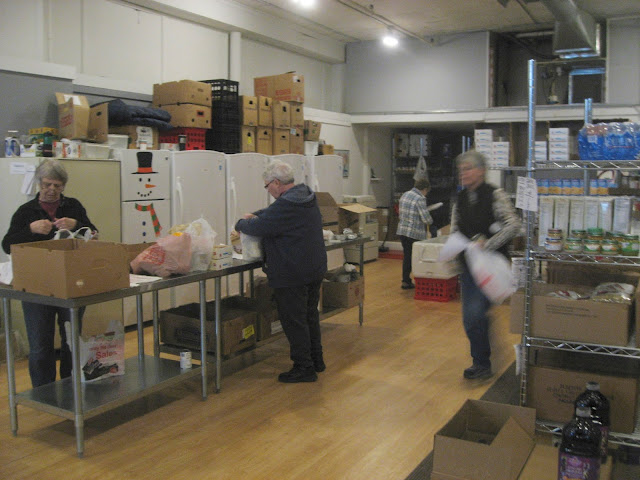 This photo was taken earlier today at the Friendship Center Food Pantry around 1 p.m. after the big rush earlier had slowed down somewhat.

A Busy Day at the Friendship Center

Our volunteers rose to the occasion, whether at the Eagle Street Room, at the food pantry or with the rides program. I asked and by about 1 p.m. we had given 21 rides!

Thanks to all of our great volunteers.

It’s been an eventful five years since a bunch of food distribution novices – working with the advice of some real experts – served 27 households from our original space at 43 Eagle St. on Wednesday, Feb. 23, 2011. The following Wednesday, March 2, we served only 14 households, our all-time low. But numbers quickly picked up to the point that we have served more than 200 families on a Wednesday
several times.

Along the way, we have developed into a true Friendship Center, with access to numerous services available at our member intake point in the Eagle Street Room of the First Baptist Church of North Adams.

A formal observance of the food pantry's fifth anniversary has not been finalized yet. Please stay tuned for more information about this in the future. Meanwhile, there will be no third-Friday interfaith meeting in February.

But more than numbers, it has really been about the people. The many friends we’ve made, and those we’ve said goodbye to, also – both pantry members and volunteers.

The NBIAI is a group of people of different faiths and denominations working together with others of good will to serve our community. For more information about the NBIAI, call Mark at 413-664-0130 or email northernberkshireinterfaith@gmail.com. To contact the Friendship Center, call 413-664-0123. 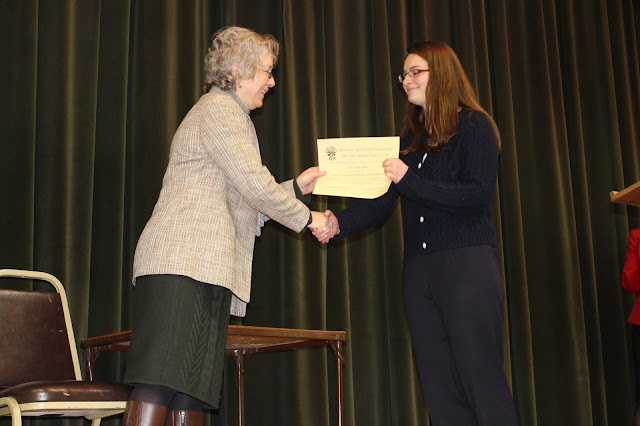 The NBIAI is a member of Berkshire Interfaith Organizing. BIO held its first annual Micah Awards Dinner on Sunday, Jan. 24.

BIO is working on food security and transportation issues. Each member group got to choose an honoree. Ours was Kathy Hrach. Kathy, a senior at Williams College, was our first ever intern over the summer. She helped set up and coordinate our volunteer rides home program and gave many rides for it. She also did several one on one conversations with our pantry members and was a go-between for us with BIO. Even as a very busy college student Kathy is still coordinating our rides program.

Here is a press release I wrote about the event, helpfully edited by Wendy Krom, BIO lead organizer and a friend:

PITTSFIELD  -- Almost to the day that they held their Founding Convention a year before in the very same place, the faith-based activists of Berkshire Interfaith Organizing stopped to celebrate.

The 2016 Micah Awards Dinner, held at the former St. Mark’s School on Columbus Avenue on Sunday, Jan. 24, was yet another first for the group. Berkshire Interfaith 0rganizing is an interfaith group of clergy, congregations and regional affiliates who seek to make justice real in our communities.

Currently BIO’s focus is on issues of food security and transportation, with regular team meetings to set goals, discuss strategy and take action.  The group played a part in its first year in securing $2 million more in funding for the Massachusetts Emergency Food Program, which provides goods for food programs throughout the state.

Nearly 300 people packed the auditorium at St. Mark’s to pay tribute to nominees chosen from among the members of 12 of its 16 member groups. Including a college student, a college professor, retirees, two nuns and more, all the nominees have made their mark through active service. They were chosen because they help exemplify the verse from the book of Micah from which the dinner gets its name: “The Lord has told us what is good. What he requires of us is this: to do what is just, to show constant love, and to live in humble fellowship with our God.”

Given that food security plays such a strong role both in BIO’s activism and in the extensive volunteerism of so many of the Micah Award nominees, it seemed appropriate that its members and guests gathered together for a meal, prepared by chef Robin Lenz, of St. John’s Episcopal Church, herself an active volunteer. Donations of food and supplies were made by BJ’s Wholesale, Guido’s Fresh Marketplace and Mazzeo’s Meats.

Before, during and after the awards program, members from the various congregations freely mingled, exchanging hugs, handshakes and stories. Though in different congregations or groups, many attendees have known each other for years and over time have volunteered for the same programs or attended community workshops together. And in a year plus of BIO, these bonds have only grown, through meetings and numerous activities, such as in numerous community organizing trainings or a
trip to Boston and the Statehouse that two vanloads of BIO activists took in September.

Berkshire Interfaith Organizing is part of a New England organizing network, with five other similar groups, called the InterValley Project, “Organizing for Justice in New England and the Nation.”

BIO is governed by an executive council made up of representatives from its member congregations and groups; it employs two community organizers and a communications specialist. Since November it has been headquartered at Shire City Sanctuary at 40 Melville St. in Pittsfield. 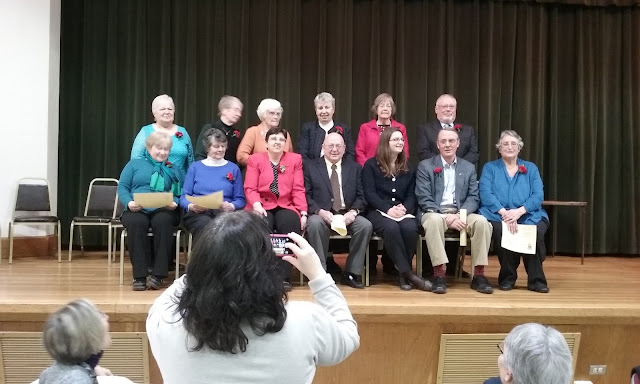 Her are the 2016 Micah award recipients. Sitting to Kathy's right is Ed Oshinsky, who has volunteered with us as a truck driver in the past; to her left is Jim Mahon, who is board president of the Berkshire Food Project. In the back row, third from left is Carolyn Behr of Williamstown who helped us greatly with two clothing sales and whose husband, Bob, volunteers at the Friendship Center.

Posted by Mark Rondeau at 6:55 PM No comments: