We host Hoosac Harvest at our next meeting March 15

We take on tough issues 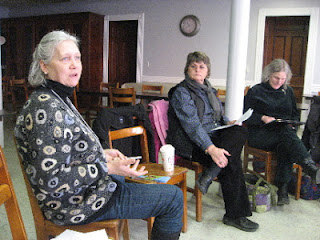 At the Feb. 15 meeting of the NBIAI, 12 people continued our discussion from January on the causes of violence and what might be done to build a more peaceful community. We also heard from Lelia Bruun of Great Barrington about the need for Fresh Air Fund host families in Berkshire County. Anyone interested in hosting an inner-city child for a week or two during the summer may call 1-800-367-0003 or visit www.freshair.org.

We, Steering Committee members of the Northern Berkshire Interfaith Action Initiative, writing in the wake of the Newtown, Conn., tragedy and amid the ongoing gun violence that plagues the inner cities of our nation, urge you to support sensible legislation to reduce gun violence.

Measures we would like to see adopted include universal comprehensive background checks for all gun purchases, limitation of the size of magazines legally available for semi-automatic rifles, and a ban on military assault-type rifles.

We also support legislation currently under review, The Stop Illegal Trafficking in Firearms Act of 2013, which would specifically prohibit the straw purchase of firearms and strengthens the law prohibiting material false statements when buying a gun.

We also urge members of the Senate to stop blocking the appointment of a new director of the federal Bureau of Alcohol Tobacco Firearms and Explosives, which has not had a full-time director since 2006. We also urge Congress to adequately fund this agency so that it can effectively enforce existing laws and future laws we hope will soon be adopted and signed into law by the President.

We support the right of citizens to own guns, but every right implies responsibilities and we seek sensible gun regulation to insure the common good and promote domestic tranquility.

I would imagine in the not-to-distant future we will focus our advocacy on maintenance of the “safety net” for the poor, given the regularly repeated federal financial crises — and threats in our state as well.

I knew this letter had run in one local paper (I personally didn’t see it) when a friend who belongs to the NRA started giving me crap about it! 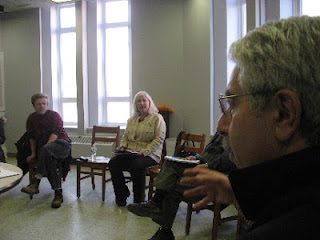 Hoosac Harvest our guest on March 15

The featured guests at our Friday, March 15, monthly Interfaith Action Initiative meeting will be two representatives of Hoosac Harvest, “a citizen-based organization that envisions a vibrant food system in which all members of the Northern Berkshire community participate and have access to locally grown, healthy, and sustainably-produced food.”

Its mission is “to support and encourage access for North Berkshire residents across all income levels to sustainably-raised, locally grown food while building relationships between the land, each other, and our food.”

The meeting will begin at 10 a.m. This should be a good discussion, on an important topic where much work remains to be done, and because it will be nice to look forward to the spring growing season. Speaking of Hoosac Harvest, it is sponsoring the following event on Thursday Night, March 7:

KNOW YOUR FARMER, KNOW YOUR FOOD
NORTH ADAMS — On Thursday, March 7 from 5-7pm, Hoosac Harvest will host the 3rd KNOW YOUR FARMER, KNOW YOUR FOOD event at the All Saints Church, Summer Street, North Adams, (next to the post office). Discover the bounty and meet the farmers and small food producers of the northern Berkshires at this FREE event. Learn about Community Supported Agriculture (CSA), enjoy free samples and light refreshments, and swap seeds with friends and neighbors for the upcoming growing season. Participating farmers include Wildstone Farm, Cricket Creek Farm, Country Dream Farm, Many Forks Farm. Also participating are Wild Oats Market, North Adams Farmers Market, and more.

March “In the Company of Friends”

Currently on “In the Company of Friends,” host Mark Lincourt welcomes Carrie Crews and Annie Rodgers of the Northern Berkshire Systems of Care Committee. This group is working to provide a hospitable local environment to youth and their families suffering from mental illness. Annie and Carrie talk with Mark about the upcoming project of inviting teens to film community service announcements about mental illness. Several members of the NBIAI Steering Committee are involved with the NBSOCC.

See “In the Company of Friends” on Northern Berkshire Community Television Corp. Channel 15 on Fridays at 5 p.m. and Mondays at 1 p.m. 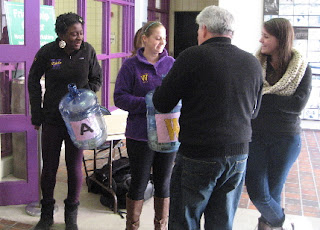 During the Williams College - Amherst men’s and women’s basketball games on Feb. 10 at Williams, members of the Williams Student Athlete Advisory Council collected donations from fans for both fhe Friendship Center and a food pantry in Amherst. We received $848 from the event to buy food for our visiting friends.

Thanks to the students, and more were involved than shown here, and to Stewart Burns, coordinator of community engagement and Jennifer Chuks, assistant women's basketball coach and faculty member. Dan Bird, Al Nelson, and Mark Rondeau were present from the Interfaith Action Initiative/Friendship Center Food Pantry.

A few words here cannot begin to show thanks to all our many friends or give an accurate picture of what they all do for us. 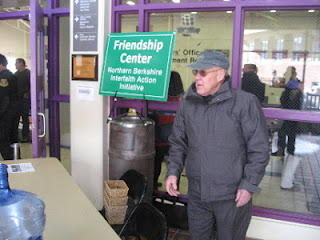 nbCC helps us every month

Still, we want to thank our friends at the Northern Berkshire Community Coalition, which encourages those attending their monthly meetings to bring items for the Friendship Center Food Pantry. We greatly appreciate this. We also give out pet food, and this year the Coalition’s UNITY program is collecting pet food as well. Here is a Coalition Facebook announcement about this Friday’s Coalition meeting. The pet supplies will go to several places in addition to the FCFP:

Speaking of the Coalition, it will be taking on the important issue of Transportation at its meeting this Friday, March 8, at 10 a.m. at the First Baptist Church of North Adams. See poster below: 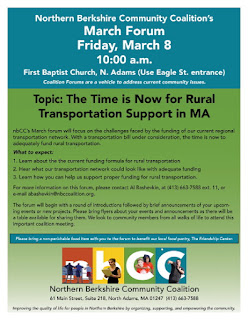 Thank you for reading this and God Bless,