A Multitude of Friends and Kindness


In this post: 1). Donations from our City Friends. 2). We keep setting new records. 3). Speaking of fundraising and outreach. 4). We learn about new smoking regulations in North Adams. 5). December “In the Company of Friends” 6). Jan. 27 Mental Illness Awareness and Support event.

Donations from our City Friends 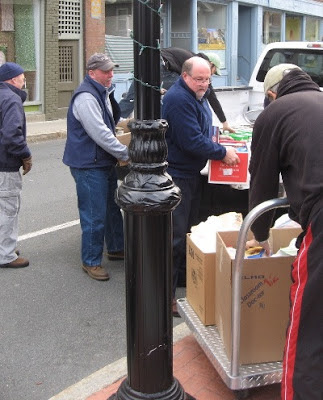 Mayor Alcombright, at the truck, helps carry in the food donations.

Things continue moving forward in a positive direction for both the Interfaith Action Initiative and for the Friendship Center Food Pantry. Most recently, on Friday, Dec. 7, we received a donation of 631 pounds of food from the drive conducted by the city and schools of North Adams at a variety of city sites.

Mayor Richard Alcombright and Superintendent of Schools James Montepare came to the Friendship Center as the food was delivered by Matt Nuvalie and Russell Beauchamp. This is the second year in a row the city has done this for us, and we are thankful. We are located in a great community!

Other notable donations since the last post here a month ago have included:

• The Doppelgangers motorcycle club, based on Union Street in North Adams recently gave us 182 lbs. or clothing and 123 lbs. of food. IBerkshires wrote an article and took a photo about the donation.

• In two donations in late November and early December, St. Elizabeth of Hungary Church in North Adams gave us a total of 541 lbs. As a member of that church, I must say I am proud of my fellow parishioners.

• We received 109 lbs. of food donated at the annual Lessons & Carols service at Williams College. Thanks to the Chaplain’s Office!

• Our friend Annie Rodgers of the Community Coalition and Sunshine Bagels gave us 160 lbs. of soap. She also gave us bagels to sell during our concert bake sale at MCLA, and they were quite popular!

• On the fundraising side, the Student Goverment Association at MCLA raised $1,802 for us with the Sam Gomez Road Race in October.

• Finally, big shouts out to the women at the Stamford Community Church who regularly bring us fine women’s and children’s clothing items to put out. And to Spencer Moser of MCLA, who has also given us a lot of winter clothing recently.

We don’t have a lot of space to give things out from, but we manage to put it out in the front for our members and it goes quickly. 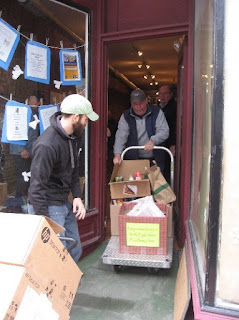 Above, some of the food goes into the Friendship Center. Below, the mayor talks to the crew assembled to sort and shelve the donations. Transcript reporter Ed Damon is on the left. 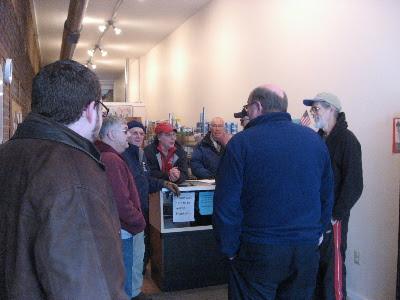 The numbers of households attending the Friendship Center have steadily increased as we approach completion of two years in operation in a couple of months. Our treasurer and general record-keep Stuart Crampton informs me that our rolls are currently at about 1,165 members. That may be a bit high, however, because some of our early members have no doubt moved on as we have added newer members. We don’t necessarily have a way to know about members who have moved away or don’t need to come to the pantry anymore.

Yet, we keep handling it. Our stalwart Volunteer Coordinator Denise Krutiak and Food Distribution Coordinator Mark Lincourt keep leading the way each week with a team of wonderful volunteers who keep showing up week after week after week. Other volunteers show up as often as they can and help in a number of other ways — such as assisting with fundraising and awareness events and much more.

Speaking of fundraising and outreach 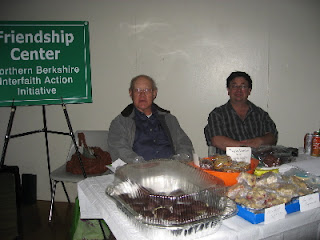 Above, Al Nelson and Mark Rondeau at our table of baked goods at the Nov. 17 benefit concert at MCLA. Denise Krutiak’s cupcakes are prominently displayed in the front  corner of the table. Below, the Band T-Bone Daddy played excellent blues at the concert. (Photos by Bert Lamb) 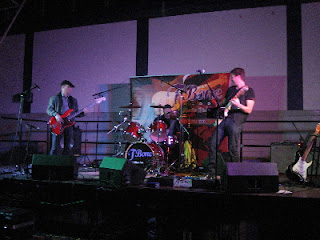 Recent NBIAI/Friendship Center outreach activities include raising $123 and some non-perishable food items at the MCLA Society of Music Hunger and Homelessness Awareness benfit concert for us on Nov. 17. Several of our volunteers and other friends made items for our bake sale and also attended the concert.

We were able to inform several people there about what we do.

On Saturday, Dec. 1, Fran Berasi, Bert Lamb, and I raised $50 for the Friendship Center with a presence in the sanctuary at the First Congregational Church in Williamstown for an Alternative Gift Fair during the Holiday Walk weekend. We gave out candy and were able to talk with several people about the Friendship Center.

Fran, right, and Bert, third from right, talk with a group of people at the Alternative Gift Fair.

We learn about new smoking regulations in North Adams 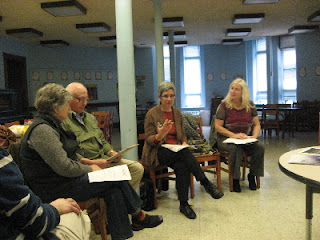 Joan Rubel, second from right, talks to us about the dangers of second-hand smoke and what North Adams is doing about it at our Nov. 16 Interfaith Initiative meeting.

Nine people attended our most recent monthly meeting, on Friday, Nov. 16, at which Joan Rubel  from Berkshire AHEC’s Tobacco-Free Community Parntership, spoke to us of the dangers of second-hand smoke and steps the City of North Adams is taking to reduce exposure to such smoke in both public housing and certain public places. Her presentation was very interesting and we hope to have her back as a presenter in the future.

The NBIAI will not hold a public meeting in December as we approach the end of a very eventful year. We will host our next monthly meeting on Friday, Jan. 18, 2013, at 10 a.m. at the First Baptist Church of North Adams (topic to be announced).

December ‘In the Company of Friends’

This December on “In the Company of Friends,” Mark Lincourt and Mark Rondeau talk about new clergy in North Adams and many of the topics dealt with here. The program airs on Northern Berkshire Community Television Corp’s Channel 15 on Fridays at 5 p.m. and Mondays at 1 p.m.

I have been quite heartened and become quite enthused by the efforts and interest of several Northern Berkshire clergy members in holding an  Interfaith event for Mental Illness Recovery and Understanding. The date has been set for Sunday evening, Jan. 27, at at New Hope Methodist Church at the corner of Water and Main Streets in Williamstown.

The likely starting time will be 7 p.m. and the service will last about 45 or 50 minutes. Rev. Kim Kie, the pastor of New Hope, has discussed plans for the event with Rev. Peter Elvin of St. John’s Episcopal Church in Williamstown, and the Rev. Carrie Bail of First Congregational Church in Williamstown and Kathy Quinn of NAMI Berkshire County are also interested in helping.

I am very much looking forward to helping present and promote this event. I stopped in at New Hope last Saturday during the Holiday Walk and saw that it is really a quite pleasant and non-threatening environment to hold such an event.

God Bless you All,

Posted by Mark Rondeau at 9:27 PM No comments: