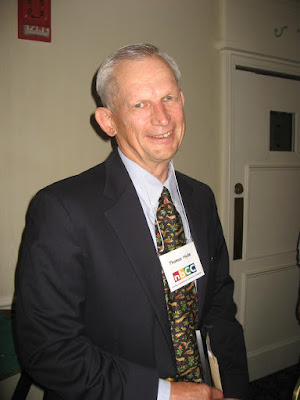 A greatly respected Northern Berkshire pediatrician, Tom was recognized for his volunteer involvement with the Friendship Center Food Pantry, the Northern Berkshire RX/Heroin Work Group and with the Hoosic River Watershed Association (HooRWA) for which he serves as president.

Tom is a great guy and we are lucky to have him as a volunteer.

The meeting was poignant because it was the last annual meeting for Executive Director Al Bashevkin, the only director the organization has ever had, who is retiring. In his remarks, Al highlighted three lessons . One of them was for organizations to help out fledgling organizations. This happened back when the Coalition was born when MCLA (then North Adams State College) provided space and support.

So, in the same way, Al noted did the Coalition help out us (NBIAI/Friendship Center Food Pantry) when we started out, including as acting as our fiscal agent for several years. Al directed some of his staff our way when we were initially swamped with guests at our food pantry.

Al also gave us, specifically me, some great advice along the way.

He has huge shoes to fill and will be missed. 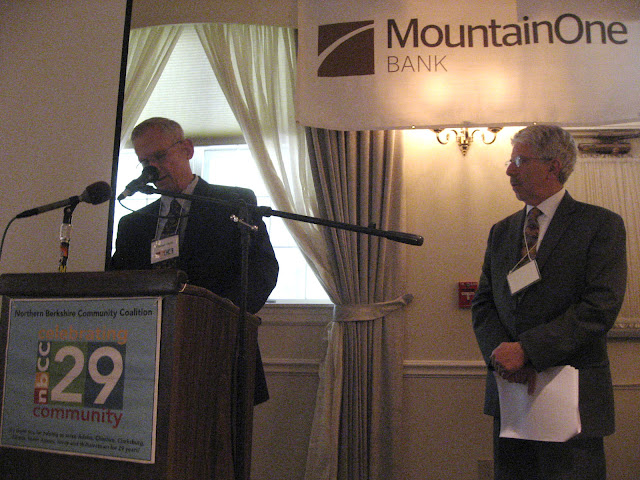 Tom Hyde and Al Bashevkin at today's event.
Posted by Mark Rondeau at 6:30 PM No comments:

1). Here are the minutes of the May 15th Interfaith Action Initiative
Meeting, compiled by Sue Walker:

Thanks to all of you who attended our meeting to share outreach and
mission projects of Northern Berkshire faith communities.  There is
more information to be had, but this is a great and very inspiring
start.  What we learned (in the most basic form)--if incorrect, please
let us all know.

BERKSHIRE FOOD PROJECT--Aubrey Armstrong:
Looking for volunteers for Louison House, such as adoption of
transitional families by churches, work
groups for the House (perhaps work crews through Berkshire House of
Corrections), need for
transportation to churches

We discussed sharing worship by attending services at other churches
and inviting other faith groups to our own.
It would be useful for No. Berkshire Interfaith Action Initiative to
create a subcommittee to look into more interfaith activities.  The
group needs a mission statement!

2). And here, in addition to better coordination of existing house of
worship activites, are some possible activies this committee could
consider:


Other ideas (not in any specific order of preference):

• Planning and presenting an interfaith Thanksgiving service in the fall.

• Working directly with the Berkshire Interfaith Organizing Project.,
which is working on issues of social justice.

• Ministry to the homeless and/or incarcerated

• Planning and presenting the existing NBIAI TV show, “In the Company
of Friends”

• Doing some work along the lines of the group Interfaith Worker
Justice, visit www.iwj.org

• Doing outreach to houses of worship on behalf of the NBIAI pantry
and voucher system.

• Other possible interfaith events or outreach?????

Hope to see you June 19th. For those who are coming directly to to the
blog, here’s information about our upcoming meeting:

The Friday, June 19, public meeting of the Northern Berkshire Interfaith Action
Initiative (NBIAI) will be the first meeting of the Initiative’s
Interfaith Programs and Events Subcommittee. All are welcome.
The meeting will be held in the Eagle Street Room of the First Baptist
Church of North Adams at 10 a.m. After introductions and a moment of
silent prayer, we will begin discussion of a mission statement, pick
out some activities to pursue and figure out the time and place of our
next meeting.

This meeting follows a very successful meeting of members of various
local houses of worship on May 15. Participants spoke of what their
churches are doing and shared ideas for further cooperation. The
minutes of this meeting, including participants, current activities
and areas of interest can be found at
http://northernberkshireinterfaith.blogspot.com

Also availlable on the blog is a very preliminary list of other
possible interfaith projects. For more information about the NBIAI or
this meeting call Mark at 413-664-0130.

Posted by Mark Rondeau at 12:11 PM No comments: