In this post: 1). Planning for the Postal Food Drive. 2). Hoosac Harvest at March meeting. 3). ‘Wish I Had Transit’ campaign. 4). Generous Donations from Friends: food, pet food, and a copier. 5). NBIAI is 3 years old! 6). Mark Lincourt now on Food Bank Board. 7). Pope Francis discussed on ‘In the Company of Friends’

Planning for the Postal Food Drive

The next meeting of the Northern Berkshire Interfaith Action Initiative will be held on Friday, April 19, at 10 a.m. in the Eagle Street Room at the First Baptist Church of North Adams.

The purpose of the meeting will be to discuss the upcoming letter carrier union food drive on May 11 and to seek other avenues of cooperation. Individuals wishing to learn more about what we do and/or about possibly volunteering to help collect and sort food on May 11th are welcome to attend.

This drive is by far the biggest non-foodbank source of donated food we receive each year, and it requires a great effort to take it from the dedicated letter carriers and sort and store it.

We hope to have representatives of several local food programs attending this meeting. We hope this discussion may aid other efforts at future collaboration.

One of the topics I hope will receive some discuss is transportation, a topic which has come to the fore recently (see related posts below).

The Northern Berkshire Interfaith Action Initiative is a group of people of various faiths and denominations working with others of good will to serve our community through charitable works, open discussions of community issues, and presentation of faith-motivated activities and events. It is the parent organization of the Friendship Center Food Pantry at 43 Eagle St. in North Adams.

For more information, call Mark Rondeau at 664-0130 or email northernberkshireinterfaith@gmail.com. 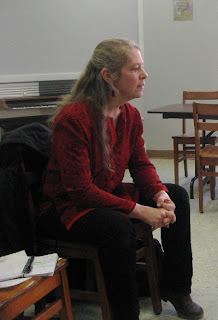 The featured guest at our Friday, March 15, monthly Interfaith Action Initiative meeting was Kathy Keeser of Hoosac Harvest, “a citizen-based organization that envisions a vibrant food system in which all members of the Northern Berkshire community participate and have access to locally grown, healthy, and sustainably produced food.”

Its mission is “to support and encourage access for North Berkshire residents across all income levels to sustainably-raised, locally grown food while building relationships between the land, each other, and our food.” See www.hoosacharvest.org

We had an interesting discussion with Kathy, including ideas about transportation, both of food and of people. One of the things we can’t help but notice is that some of our visiting friends at the Friendship Center have a hard time either getting there and/or getting home loaded with bags. We do call people taxis — several times per week — but is this is all that can be done?

Anyone interested in this topic is welcome to attend.

‘Wish I Had Transit’ campaign 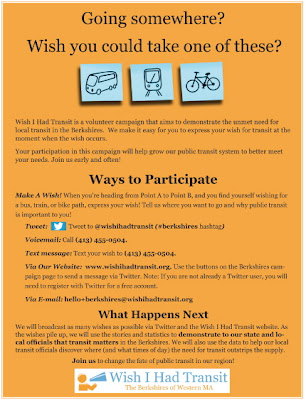 This increased talk about transportation is a result of the March meeting of the Northern Berkshire Community Coalition at which the county’s bus service and the inequity of funding between the Boston area and Berkshire County were the main topics of discussion, along with regular people's difficulties getting around.

Part of the effort to redress this inequity is the Wish I Had Transit campaign, which anyone can participate in by expressing a wish for better transit. Here is an explanation of the campaign from the website http://www.wishihadtransit.org

“We have a remarkable regional transit system with active, progressive leadership. However, funding inequities prevent the system from providing the level of service that neighboring regions take for granted. With this campaign, we aim to demonstrate that the would-be ridership of Berkshire County is deserving of more equitable transit.

“The Berkshire Regional Transit Authority (BRTA) provides public transportation services to twenty-four member communities within Berkshire County, the westernmost region of Massachusetts. The BRTA's daily service area spans a region as large as Rhode Island; bordered by Vermont to the north, New York to the west and Connecticut to the south. Fixed route service is provided by fourteen bus routes in twelve communities from Williamstown to Great Barrington, Monday through Saturday. Paratransit services are provided to eligible persons from the BRTA's member communities for ambulatory, non-ambulatory, or complementary paratransit ADA service.

“The BRTA’s vision is to have public transit in service seven days a week, operating until 11 p.m. The three areas of our county, north-central-south, would have vehicles circulating in both directions every half hour and connecting with larger express buses bringing customers to the Intermodal Center in Pittsfield to connect with other parts of the county, intercity buses and trains.

“We want our workforce to be able to get to and from work for all three shifts without long waits. To achieve this efficiently and effectively, the BRTA system must be supported and supplemented by Intelligent Transportation Systems.”

This is not only a matter of need but also one of justice. That’s why I hope the NBIAI in some small way can participate in this effort. 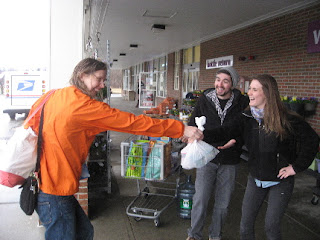 A woman gives Caroline Webster, of the MCLA Chapter of MassPIRG, a donation at Stop & Shop in North Adams on Monday, April 1.

As usual, we are the recipients of numerous generous donations.

For instance, on Monday, April 1, volunteers stood outside Stop & Shop in North Adams for several hours taking donations. The next day they dropped off 131 lbs. of non-perishable food items at the Friendship Center. 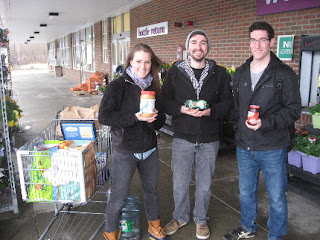 In March, the Friendship Center received a high-quality copier thanks to the generosity of our friends at the First Baptist Church of North Adams and its pastor, Dave Anderson.

The First Baptist Church continues to be a great support. We hold our monthly meetings in its Eagle Street Room and each Wednesday during our day food pantry session we sign people up in this room so that they don’t have to wait in a long line outside.

Here are some photos of the copier being delivered: 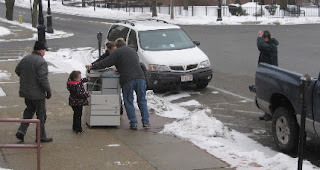 Here a group of people from First Baptist move the copier toward Pastor Dave’s truck. 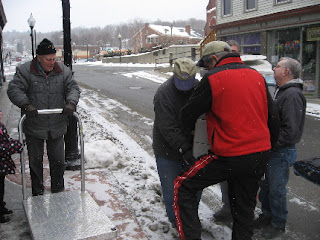 It took four men to get it off the truck and into the Friendship Center. And below, the copier in its new home. 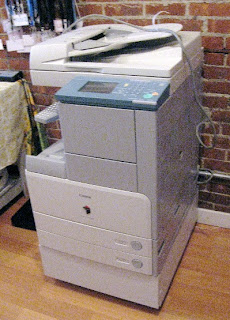 And we also want to thank the UNITY youth development program of the Northern Berkshire Community Coalition for donating 225 lbs. of dog and cat food to the Friendship Center. It is greatly needed and greatly appreciated.

In March, volunteers from the program took pet product donations from customers at the North Adams Wal-Mart for us and for other food programs. Two of the several youth involved in the pet food drive are pictured below. 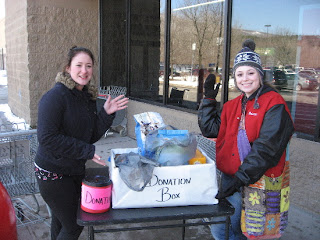 Monday, April 9, marked the third anniversary of the Northern Berkshire Interfaith Action Initiative. That was the date in 2010 of a Northern Berkshire Community Coalition forum on “ Intersecting
the Faith Community with Social Issues.” Accounts vary of how things went at that forum but I recently discussed the beginnings with Al Nelson, at the recent NBIAI Steering Committee retreat.

From our perspective, faith communities needed to be doing more to work together for the community. Al and I were thinking along the same lines and, having been challenged by one of the clergy members present, began after the form to discuss starting an effort ourselves. The name Interfaith Action Initiative came to be during our first discussion.

We held our first public meeting on Friday, May 21, 2010, at the First Baptist Church of North Adams and were quite pleased by how many people showed up. We looked for a major project to take on for several months until it came in the form of a need for a food pantry. The Friendship Center Food Pantry opened on Wednesday, Feb. 23, 2011.

In three years the pantry has grown to serve about 1,300 families in North Adams, Clarksburg and Florida. We run an emergency voucher system, and at the end of January helped host and present a very successful interfaith service for Mental Illness Awareness and Understanding.

Over the years we have developed a steering committee of nine people, and on Saturday, March 16, we held a six-hour retreat. Part of what we decided was to pursue legal non-profit status. We feel that we can maintain the faith-based, grassroots nature of our organization while formalizing our structure.

We also launched our second letter-based fundraising campaign. Anyone reading this who would like to make a financial donation may do so by sending a check made out to the Friendship Center Food Pantry, and mailing it to The Friendship Center, 43 Eagle St., North Adams, MA 01247.

Donations are tax-deductible through our non-profit fiscal agent. 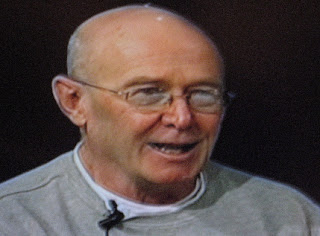 One of those who attended that first meeting in May 2010 and has been with us every step of the way since is Mark Lincourt. We are very pleased to annouce that Mark, who is a member of our streering committee and is food pantry food distribution director was recently named to the Food Bank of Western Massachusetts Board of Directors.

We are also pleased that after suffering a very bad fall and breaking his arm this winter, Mark started back on the evening shift at the Friendship Center this past week. Mark had stayed involved in other ways, of course, while he was recouperating. One of them was to host or co-host our NBIAI local-access TV program, “In the Company of Friends.” This brings us to the final segment of this long post.

Pope Francis discussed on ‘In the Company of Friends’ 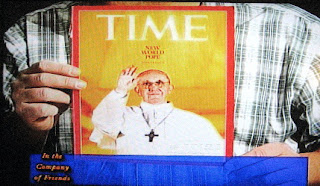 Mark Lincourt and I co-host “In the Company of Friends.” When our choice for guest for the April program couldn’t make it, I offered to talk about the new pope. And so, Mark and I had an enjoyable discussion.

“In the Company of Friends” is shown  on Northern Berkshire Community Television Corp. Channel 15 on Fridays at 5 p.m. and Mondays at 1 p.m.

For an article I wrote as religion editor at the Bennington Banner which deals with much of what I had to say on the program, visit http://www.benningtonbanner.com/opinion/ci_22907058/one-catholics-easter-hope-church

Thank you for reading all or part of this and God Bless!