On the Road to Boston with BIO 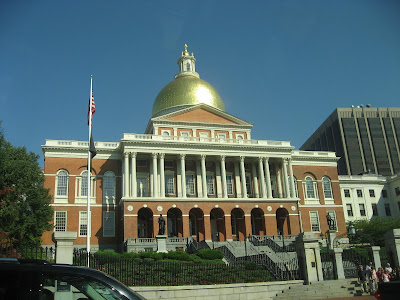 The State House in Boston

Contents: Why we went; A rich experience; First food victory; Food and Jobs: Mass. Food Trust; The opening of the photo exhibit; Poverty in Massachusetts; Circle of prayer

On Wednesday, Sept. 15, two vans filled with Berkshire County people travelled to Boston under the aegis of Berkshire Interfaith Organizing (BIO).
The first purpose was to attend an opening for “Take Another Look: A Photographic Essay on Food Insecurity” by Nicholas DeCandia, a Berkshire County photographer. It is now on display in Doric Hall at the State House in Boston, where we saw it. All tours of the State House begin and end in this hall, we were told.

As BIO lead organizer Wendy Krom said as she helped drive us down to Boston, paraphrased: We need to show folks down there that the Berkshires is more than just Tanglewood and second-home owners.
The Northern Berkshire Interfaith Action Initiative (NBIAI) joined BIO in July, becoming its first organizational, non-congregational member. So on one of those vans were five people who in one way or another have been connected with NBIAI’s Friendship Center Food Pantry as volunteers.

The others were from Adams and points south in Berkshire County. Many were clergy and lay leaders of BIO. Others, like me, were delegates to BIO and participants in its food insecurity task force. 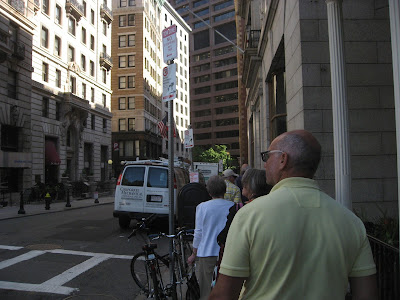 We walk down Beacon Street to the Congregational Building, where the MPHA offices are located.

In addition to attending the opening at the State House, the trip had other purposes. One unspoken purpose was to familiarize us with the Massachusetts Legislature and more in our state capital.
I am a native of Massachusetts and was editor of a weekly newspaper in Northern Berkshire for nine years and had never visited the State House until this week. It was not part of my education up to 10th grade in North Adams public schools (my family moved out of state when I was 15).

Rep. William “Smitty” Pignatelli, D-Lenox, gave us a heartfelt tour of the House Chamber. He mentioned how happy he was to see people from Berkshire County, as lots of us don’t make our way down there. He noted how Berkshire schools don’t take trips to Boston, unlike public schools a lot closer to Boston, because it’s a whole-day thing for us and expensive.
We need to become a lot more familiar with the State House. There will no doubt be more of these trips, and I hope more of the NBIAI/Friendship Center team will experience it. Even an old boy like me found the visit enlightening, inspiring and empowering.

Another reason we went to Boston was to offer thanks for the $2 million increase in funding in the budget for the Massachusetts Emergency Food Program (MEFAP). The two legislators we interacted with were Pignatelli and State Sen. Ben Downing, D-Pittsfield, who spoke at the opening and gave us a tour of the Senate chambers. (We had group photos taken in both legislative chambers). 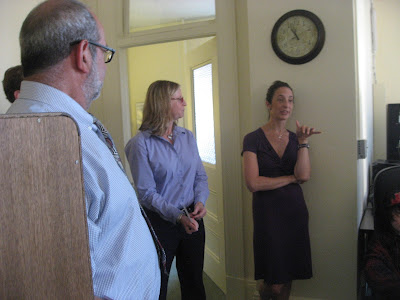 Another reason we went to Boston was to learn about and advocate for the Massachusetts Food Trust program, which the state legislature created and Gov. Deval Patrick signed into law in 2014 but which has not been funded.

Modeled on similar initiatives in other states such as New York, Pennsylvania and California, this program would provide loans, grants and technical assistance to support new and expanded healthy food retailers and food enterprises in areas that need them most.

I did not know this until recently, but Massachusetts is 47 of the 50 states in access to grocery stores. Although North Adams has three grocery stores, we are still part of an area of the state considered a “food desert.”
The Food Trust is about more than just more and expanded grocery stores, however. It might also provide funding farmer’s markets, mobile markets, community kitchens, food truck commissaries, greenhouses, food distribution hubs and more, projects that would create jobs in low or moderate income communities.

We have the opportunity here in Berkshire/Northern Berkshire, as I and others see it, for a mobile food pantry, a centralized food hub capable of storing food, and possibly even a new farm providing employment.

A chief advocate for the Massachusetts Food Trust is the Massachusetts Public HealthAssociation (MPHA), which served as home base for us during our visit. It is located on the seventh floor of a building on Beacon Street within sight of the State House. They were great hosts.

Their goal is to get $10 million in seed funding for the Mass. Food Trust. For the 2016 fiscal year, MPHA seeks $2.5 million in the state budget. They are also seeking the release of the $2 million in bond funds dedicated to the Food Trust.

I am hoping that BIO will be conducting more trips to Boston for some hands-on lobbying. It is an empowering experience.

The opening of the photo exhibit 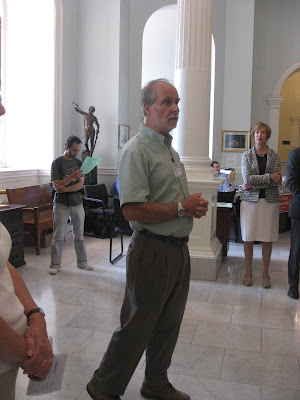 The Rev. Joel Huntington was the first to speak “Take Another Look: A Photographic Essay on Food Insecurity.” All the photos were taken at South Congregational Church, south of Park Square on Route 7 in Pittsfield. They have a huge food operation, serving about 450 families a week at the food pantry and another 60 to 80 people with meals once a week.

By comparison, the Friendship Center Food Pantry serves between 150 and 200 families per week. The Berkshire Food Project probably serves even more meals per week with its program Mondays through Friday.
Huntington noted that while this is the largest food pantry in Pittsfield, it’s not the only one. “There’s a lot of poverty” in that city of about 42,000, he said. “So what do we make if it?”


“Jesus once said, ‘The poor you will have with you always, and people often just stop there. And say, ‘Okay, therefore, there’s nothing we can do, nothing we need to do, it’s a form resignation or even justification…


To the question of how do we do that, he told the story of Gretchen DeBartolo who worked next door to the church for years and recently started volunteering for its meals program. She found her involvement very rewarding and spoke to DeCandia about doing a photo project. 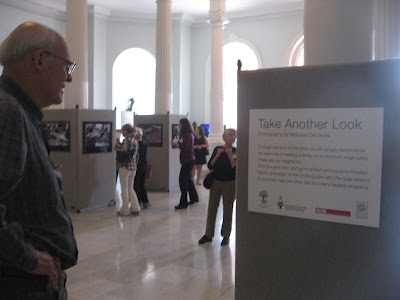 Sam Smith of Williamstown at "Take Another Look." Below, Lauryn Levesque and Gretchen DeBartolo at the exhibit. 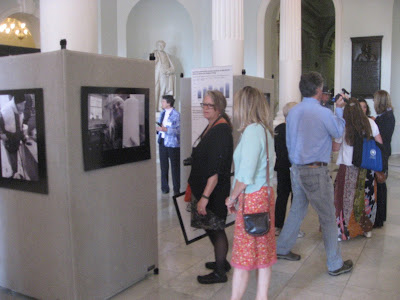 Paula Morey, of Pittsfield, who is a member of the BIO food insecurity team and is a first cousin of mine, spoke about the work of BIO, including the success in raising MEFAP funding.

“Our next priority is to support funding for the Massachusetts Food Trust,” she said. “We believe that if it’s funded appropriately, it will create opportunities for good jobs, increase access to healthy food and revitalization of our communities.”

“It’s easy to think that these problems are too big…but it’s important to remember that the work of an individual has ripple effects far greater than anything that we see,” he said. “I know that I am hopeful because of all the work that you all do.” 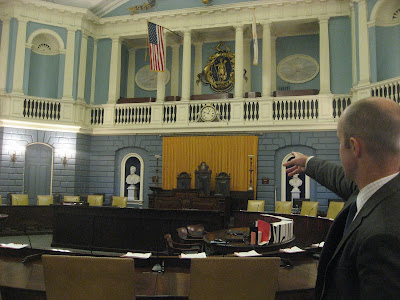 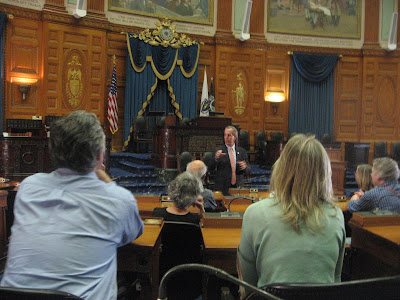 State Auditor Suzanne Bump, who is from Great Barrington, also addressed us and made a point I had not before considered. First, she spoke of the moral imperative to serve the poor among us, and I found charming her story that she knew her future husband was right for her because he was actively involved in serving the poor when she met him.

“On a per capita basis we have a larger income than most other states in the nation,” Bump said. But digging down in the figures “you see that most of that wealth is concentrated in just a couple of counties here in Massachusetts, and even within those counties, Suffolk County, Middlesex County, there is food insecurity.
"But those counties skew the figures for Massachusetts, because once we move off those couple of counties, then you see that [the average of family] income in the rest of Massachusetts is far below the statewide average, you’re also below the national average in terms of family income.”

On this point, the photo exhibit included some charts and graphs. One of them was titled “Families in Berkshire County need up to $86,000 to attain a secure yet modest living.”
Even for one parent and one child, the amount is $53,527. These figures for 2013 from the Economy Policy Institute ring true to me.

We ended our visit with lunches we brought sitting on Boston Common within view of the State House. We each shared what we got from our visit. My main conclusion is that while democracy may be endangered at the national level, it is still alive in Massachusetts and the visit was very empowering. Another member of our group illustrated with food on hand how little one can buy for a family on $25 of SNAP (food stamp) benefits.

We ended our lunch holding hands in a circle, as Rev. Huntington led us in a prayer, no doubt showing the other people in the Common that faith, too, is still alive in Massachusetts. 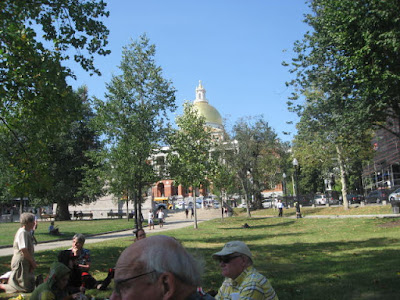 Our place on the Common before leaving Boston.
Posted by Mark Rondeau at 6:22 PM No comments: