Something New Student Art in our Window

Thanks to long-time volunteer, weekend cleaner and board member Sharon May, we have something new in our front display window -- art by local students. Specifically, watercolors in the Drury High School Visual Arts Program for grades 7 and 8, taught by Ms. Manville.

Come on down to get a better look! 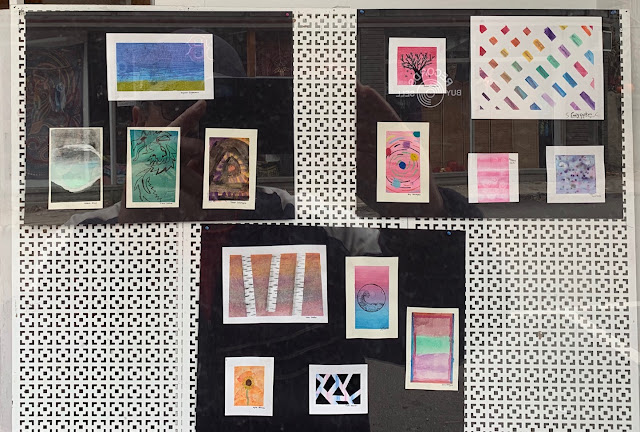 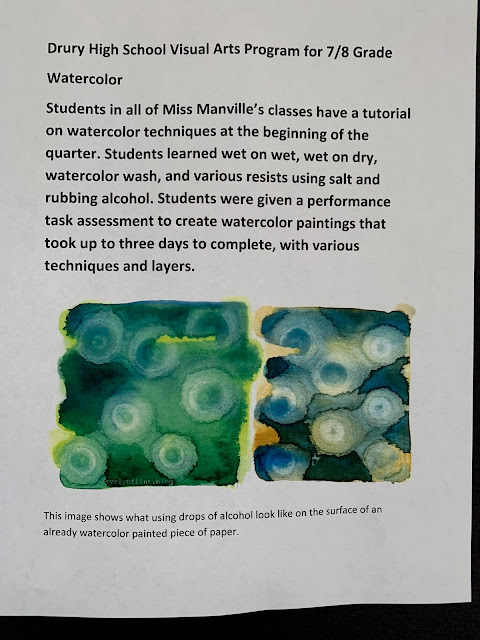 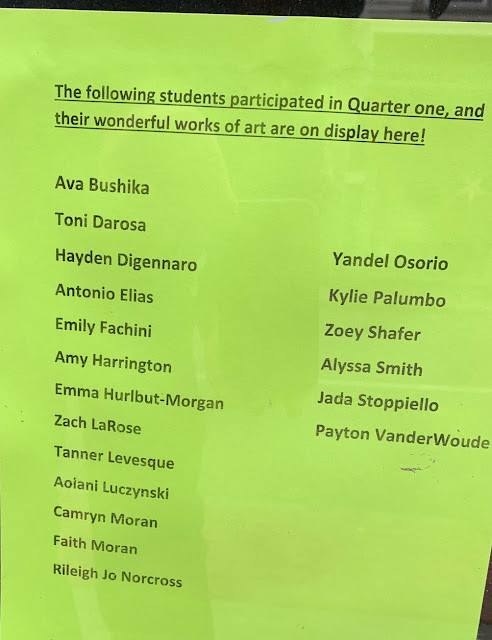 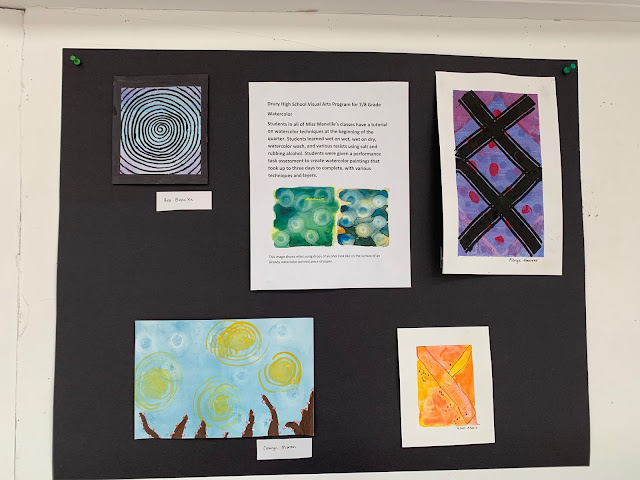 Every year we do a fundraising letter campaign. This year the back of our letter looks different, thanks to Bert Lamb, Fran Berasi and Becks Printing. If you want to donate financially and aren't on our mailing list, you can do so at our new website, https://friendshipfoodpantry.org/give-help 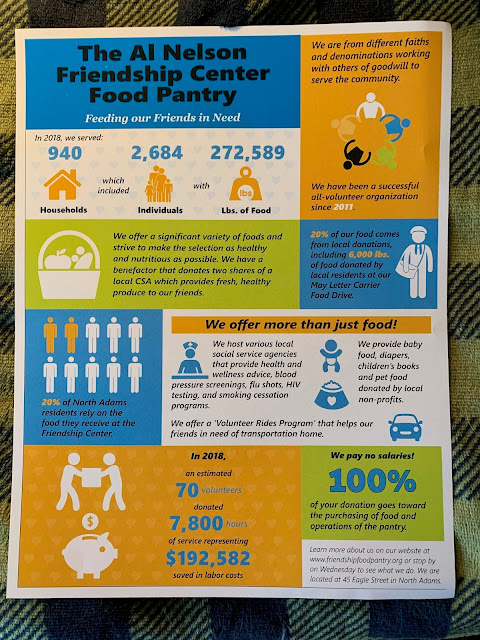 Below, the front of our current fundraising letter. Above, the back of the letter. 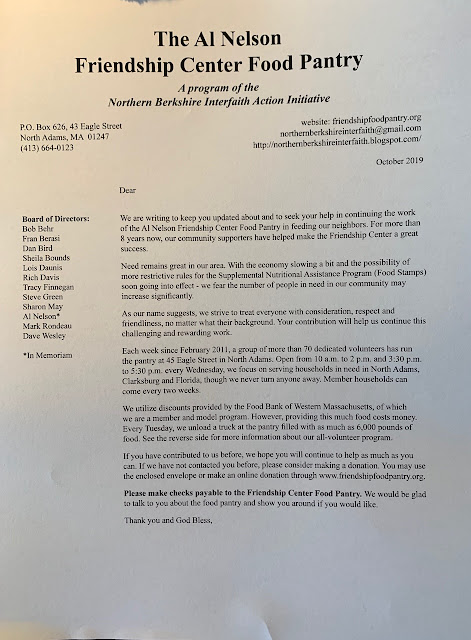 Please see graphic for the types of items most needed.

Mayor Tom Bernard is seeking to double the amount of food and personal care items donated, to 2,000 lbs. this year. Thanks to the Mayor and All City and School Employees and Departments, Residents and everyone else involved. We live in a generous community! 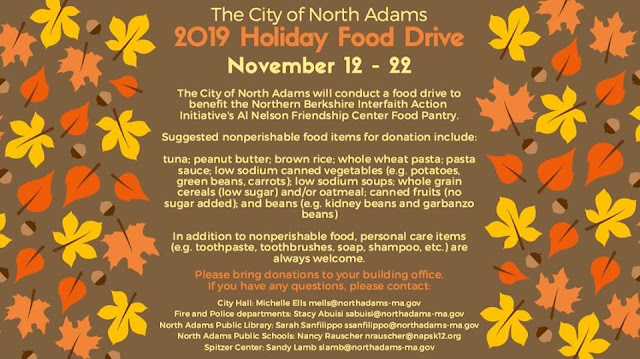 
And finally, here are some of our great volunteers on a Tuesday stocking the food we just brought in on a rental truck from the Food Bank of Western Massachusetts, in Hatfield, like we do about 50 of the 52 weeks in a year. 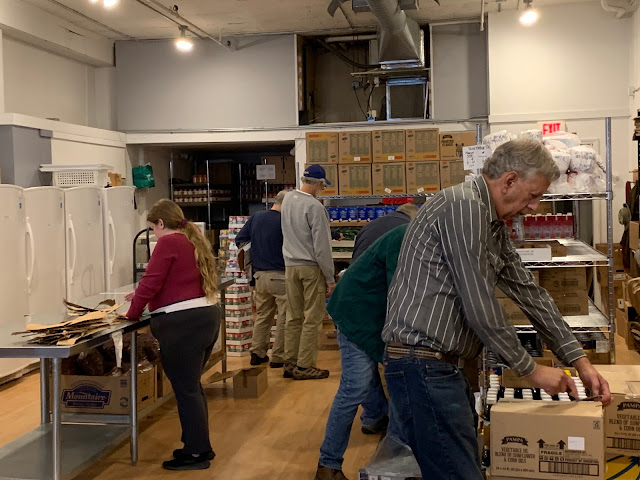 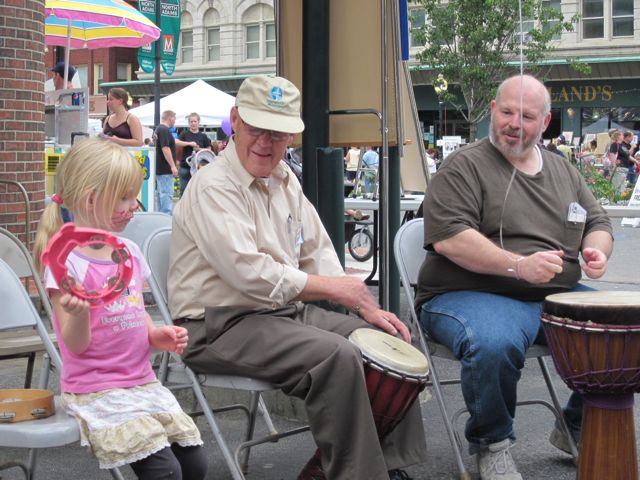 The following reflection began our Board of Directors' retreat today, April 8.

Al Bashevkin, who is leading our retreat today, suggested that we being this retreat with a review of our origins as a group. I agree and think this would be both informative and helpful in looking forward.

All this started with the idea of greater cooperation for the common good among people of faith and houses of worship in Northern Berkshire. We did not have a project at the beginning.

The very start was the Northern Berkshire Community Coalition forum of April 9, 2010 -- almost nine years ago to the day. The topic was The Intersection of Faith and the Community. Several local clergy members attended.

During this discussion Al Nelson and I suggested that the local clergy should be doing more to foster interfaith cooperation in the community. Some of the clergy present turned this right back on us. Especially the Rev. Carrie Bail, then of the First Congregational Church of Williamstown, and Rabbi Jeff Goldwasser, then rabbi of Congregation Beth Israel in North Adams.

“Why don't you do something,” is what they responded, to us as people of faith.

So Al and I decided to hold meetings for what we tentatively called the Northern Berkshire Interfaith Action Initiative. We held monthly meetings at the Eagle Street Room at First Baptist to look for project ideas. We wanted to find something that was needed and wasn't a duplication of effort.

We had a diverse group of people at our meetings: protestants from various denominations, some Catholics, a Muslim, two people into native American spirituality and one or two agnostics. One of our most active participants was rabbi Goldwasser.

We examined a number of possibilities for service and we also considered such activities as an interfaith Thanksgiving celebration. We couldn't agree on anything. But we did manage to have a drumming circle led by Otha Day at the 2010 North Adams Downtown Celebration.

Interfaith groups of various kinds can be found all over the country. They do everything from conducting interfaith discussions between Jews and Muslims in cities such as Chicago to running service projects and agencies all over. One such group can be found in nearby Bennington, Vermont.

A large part of my interest in interfaith work came from my experience with the interfaith group in Bennington, Vermont. The Interfaith Council and its service arm, Greater Bennington Interfaith Community Services Inc. (GBICS) is a group of both laypeople and clergy.

It has a part-time executive director and runs the Kitchen Cupboard Food Pantry, which started just a few months before we started one; a free medical clinic and a fuel fund. Among other things, members of this interfaith group meet regularly and submit columns about faith weekly to the Bennington Banner.

In late 2010, it became apparent that the Berkshire Community Action Council (BCAC) would no longer be able to run its food pantry in North Adams because of space. The consensus then was that there were not enough places offering emergency food in North Adams in particular.

Around the same time, our friend Lois Daunis had mentioned to us the possibility of using space she and her husband owned at 43 Eagle Street for a headquarters for our interfaith group. Soon, the idea of using that space to store the BCAC food or perhaps operating a food pantry was also in the air.

Well, needless to say: We had found our project. We worked with Lois and Mike and with BCAC and the Food Bank and Kim McMann of Target Hunger and got a crash course in running a food pantry. We modeled a lot of what we do from our visits to the Charity Center in Adams. Later, we visited the Kitchen Cupboard in Bennington.

We opened the Friendship Center in February 2011 at 43 Eagle St. The name was inspired by the name Charity Center. In our case the goal was to go one step beyond and offer friendship.

The emphasis of all of the early founders was to treat people with dignity and respect – as friends. This is why we don't use the word “clients.” Happily, this spirit and attitude has stuck.

We are not social workers – we are an all-volunteer organization of people motivated by the best traditions of faith and/or humanistic concern.

And that's an important point, which has evolved into our working mission statement: “The NBIAI is a group of people of different faiths and denominations working together with others of goodwill to serve the community.”

So far, it's a formula that works. And it also doesn't limit us to just a food pantry. Yes, that's our main task by far. But over the years we have broadened this to offering all manner of social services, including a nurse, at our sign-in point at the Eagle Street Room. We also offer books, diapers, personal care items and free rides home.

Love is creative. And there's a lot of love in what we do.

Other activities over the years

It's worth briefly mentioning that we picked up the ministry voucher system from the now-defunct Williamstown Ecumenical Association shortly after we opened the food pantry. This was introduced to us through one of our monthly public meetings that continued for years after the Friendship Center opened.

Those monthly public meetings provided an opportunity for faith sharing, idea sharing, telling folks about out work at the Friendship Center and learning about other programs. Presenters over the years at these meetings included Habitat for Humanity, the Fresh Air Fund, Western Mass. Legal Services, Berkshire County Jail Rehabilitation Services, and Berkshire Health Systems and many more. After Newtown we had a meeting on violence at which we decided to send letters to the media and Congress voicing our concern for gun safety legislation.

For two years after a presentation by the National Alliance on Mental Illness Berkshire County, we presented – with the help of the Rev. Kim Kie one year and the Rev. Dan Randall the next – an interfaith service for mental illness survivors and their families. The first one was particularly well-attended and attracted people from all over the county.

From the beginning we have had a blogspot blog, a Facebook page and a Twitter account. Now, thanks mostly to Fran, we have a website, too. For several years, with early volunteers Mark Lincourt and Corinne Case, we also ran a public access TV show called “In The Company of Friends.”

Our crown jewel is of course the work of what we now call Al Nelson Friendship Center, which most of us refer to simply as the “food pantry.” And we can be justly proud of it. It is considered a model program by the Food Bank of Western Massachusetts. Its volunteers over the years are the finest group of people, by far, I have ever been associated with.

But I'd like to draw on this backstory about our origins for a couple of concluding points. I see benefits now, as I did when Al and I worked to incorporate us, to being an interfaith group that runs a food pantry.

One is to keep alive the idea of people of different faiths and those of none working together in an intentional way to serve the community. We provide a social service but with a difference.

Defining ourselves as an interfaith group also makes it less of a leap to add programming – if it makes sense. Food pantries are usually adjuncts of larger groups – churches, community action councils etc. – and having an interfaith identity associates us with a venerable movement that takes many forms in the United States today.

Finally, in this time of division and scapegoating, what could be more important than bringing people with different perspectives about politics and religion together in voluntary service to the poor? Service that is friendly, respectful and given enthusiastically?

I would offer that how we do what we do is as important as what we do. We should think big, but in any case we should keep the eye on the ball: serving our local friends with dignity, respect and friendship in the best traditions of faith and humanism.